Sigrun Gunnarsdóttir (b.1950) was born and raised in Eiði, a village of approximately 700 inhabitiants. The village lies at the north-westerly point of Eysturoy, second largest island in the Faroe Islands. Here Sigrun has developed a pictorial universe which resembles little else we have seen.

Good artworks seldom receive the attention they deserve, for usually we do not allow enough time to see a work of art, to notice its rich layers of meaning and painterly qualities. This site therefore provides an opportunity to immerse ourselves in some of Sigrun Gunnarsdóttir’s principle artworks. The quiet intensity that characterizes her paintings invites reflection – speculation over what more may lie behind them. We seek alternative interpretations that can bring us closer to their enigmatic core. Like wise, see are curious as to which artistic paths have led Sigrun to develop her unique expression, and how she finds artistic impulses in a small isolated Faroese village.

Sigrun is not, however, the first from her village to succeed in artistic innovation, for it was here the Faroe Islands’ first landscape painter lived almost his entire life. He was Sigrun’s maternal grandfather, and although only three when he died, she became well acquainted with him as an artist because her childhood home was filled with his paintings. As such, he became an impetus for her choice of career. 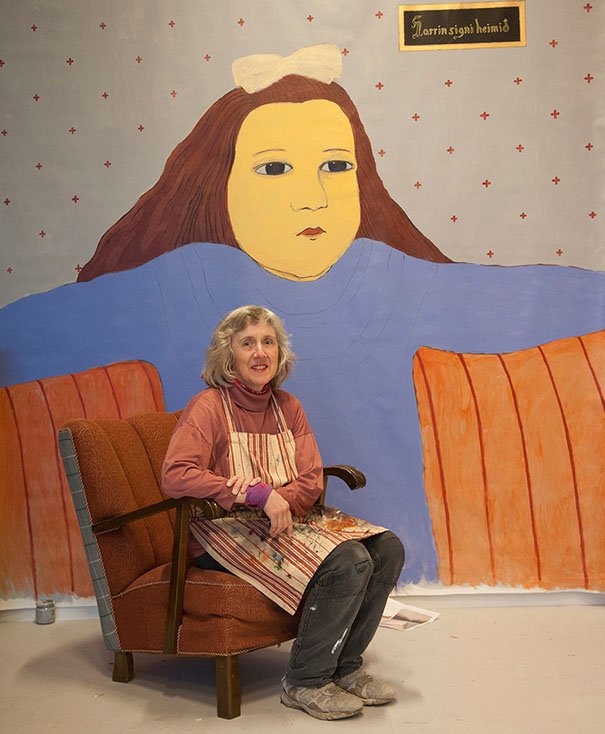 “At first glance, the painter Sigrun Gunnarsdóttir (born 1950) appears to be an outsider on the Faroese art scene. The influence from Faroese culture is still visible, though, and her works cannot be regarded outside a Faroese or Nordic context. Her symbolic language is figurative in nature. The deeper meaning of life is at stake here. The wonders of creation, often in the shape of a tinu flower or bird, put things into perspective. The motifs are assertive and direct, and never indifferent. Whether she is depicting the lonely and abandoned, the miracle of childbirth, or and old woman with coarse, hard-working hands, the piece always exudes human warmth”.
Dagmar WarmingAuthor
“- The works of Sigrun G. Niclasen are epic and full of symbolic and religious overtones. The bird, plant, mountain and child are firm epic and symbolic pointers in a universe moving towards dreamlike and surreal horizons. Her themes have been longing, disruption, hope and redemption”.
Jens FredriksenAuthor
“One of the most individualistic Faroese artists today is Sigrun Gunnarsdóttir. She works with a moderate Naivistic idiom too, and a bleak, greyish palette. Both her style and the intensely disturbing atmosphere found in her works recalls Giorgio de Chirico (1888-1978), the italian Surrealist and Symbolist pioneer. And, as in Chirico’s pictures, we understand immediately the content of Sigrun’s images, but, at the same time, sense a metaphorical extension which reflects the unconscious. After having seen her pictures, they are irredeemably etched into mind, accompanying us in our thoughts for a considerable time thereafter”.
Eva FursethArt Historian
Previous
Next